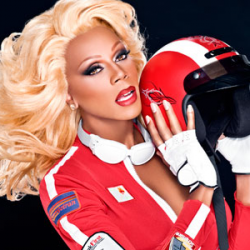 This week on Rupauls Drag Race we were reintroduced to everyones favorite game, The Snatch Game. Which quickly turned interesting as the girls got very catty. 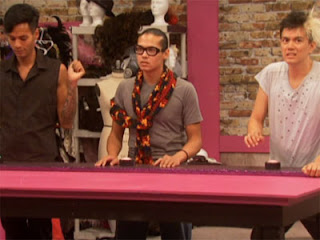 This week the girls mini challenge was a game show called Ru Says. The girls played the games in sets of threes as they had to fill in the blank from various phrases of Rupaul. Whom ever got the answer right would advance to the final round and it would be out of the top 3 queens to duke it out. The grand prize of this mini challenge was a phone call home to whom ever the top queen was. Delta managed to be the top winner out of all the queens Naturally winning the phone call home. After that Ru told the girls that this weeks main challenge was the snatch game. The snatch game is a game that requires each of the girls to choose there favorite celebrity and make up a parody of them. There are to guest that will be asked various questions to see which "Celebrity" would get the closet to them. The player with the highest points at the end would win. As Ru exited the work room Delta who one the mini challenge went to Shangela and told her that she didn't need the phone call home and because her grandmother was so special she could have the phone call home. 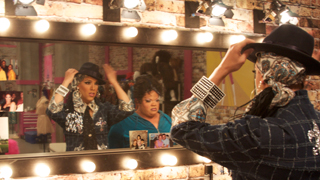 For the snatch game the girls came up with great celebrities to portray. Stacy struggled with coming up with who she would portray as her first choice was Anna Nicole Smith. Ru came to the work room to visit the girls and get a feel for whom the girls were going to be. Ru went to talk to Stacy and let her know that she did not feel confident about her doing Anna Nicole because she did not have a clear understanding of what she was going to do. Struggling with what Ru said Stacy went to Shangela for some sisterly advice. Shangela suggested that Stacy do Monique as she could relate to Monique more. Alexis portrayed a pregnant butch Alicia Keys, Raja was Tyra Bank and the list goes on . The game was very good as alot of the queens really portrayed there characters but guest stars, Alicia Tyler and Amber Rose felt like Mariah did a very poor Job 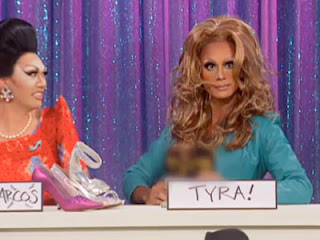 On the main stage the girls were asked to where there best drag. A lot of the girls looks were elegant and high fashion. Ru let the girls no that it was time to stop playing as he announced in the very beginning of the mainstage presentation who the 3 best and 3 worst players. The 3 best players were Raja, Stacy and Alexis and the 3 worst was Mariah, Delta, and Yara. Mariah told the judges that she felt that there were some other queens that she felt like deserved to be in her place. All of the girls came back to the stage as Stacy was this weeks winner. A lot of the queens had a lot of harsh feeling because they felt as though just because Stacy had improved she still didn't deserve to win. Delta , Yara and Mariah was left standing there as Mariah and Delta was the bottom two contestants and had to lip sync for their lives. Because of Mariah's lack of knowledge of the words Delta sent her packing. I was very disappointed because my votes have always been for my good good girlfriend Mariah Balenciaga. She has a very fierce look and very good performance. I really wish here the best of luck in all her future endeavours. Follow her on twitter @mugz4dayz