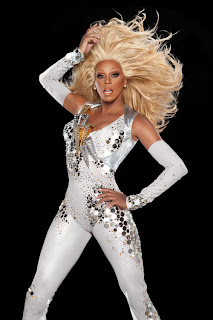 So last week on Rupauls Drag Race the girls were face with the challenge of being very creative in there presentation on a work out video. 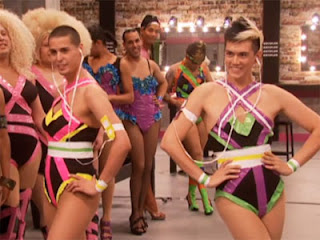 The weeks mini challenge was for the girls to create very creative and unique leotards out of duck tape as a pair. Carmen and Manila paired up and won the challenge. They choose to create outfits inspired by the old retro work out videos out of multi colored neon tape and accenting them with home made duck tape Ipod and earphones.

Carmen and Manila were then deemed the team captains of this weeks challenge. Team Carmen consisted of Delta, Mariah, Yara Sofia, India Ferrah. Team Manila consisted of Raja, Shangela, Mimi Imfurst, Alexis Mateo, and Ms Stacy Layne Matthews. The contest had each contestant to take a piece of exercise equipment and adapting it to their own technique. Sum pieces of exercise equipment were the exercise ball, the exercise step, shake weight and many many more. 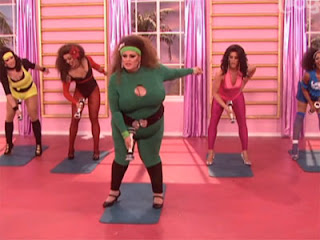 Each team then came to the set to turn there videos out. Some of the the contestants and their exercises were not up to par as their performances in the videos were very distasteful. Mimi Imfurst performance was horrible as the judges and myself felt as though instead of making a video on health she was turning it into a comedy.

For their mainstage presentation the girls were asked to wear their best outfits that show off there best body part for mainstage. A lot of the girls choose to show off the same parts of their bodies which was their chest but the judges felt as though some of their deliveries were not enough or for one a little to much. India decided to wear a black see through outfit which should off her rack, with sparkled X's on her nipples and a what appeared to be sparkled tarantula on her what the judges called vajayjay. 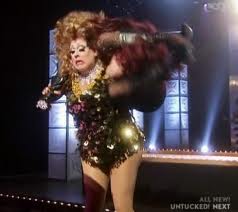 By the end of the night India and Mimi were left to lip sync for their lives. Mimi's rough poor performance made her be instantly eliminated that evening. Mimi decided to take matters in her own hands as she picked India up and carried her across the stage. As Ru stated this is a contest on the ability to perform as a drag queen not on the ability of physical contact.

Hmmm We will see what this week holds as the contest is getting thicker and better. Stay tuned to Logo for more of Rupauls Drag Race Monday nights at 10pm.