Chris Brown in the nude 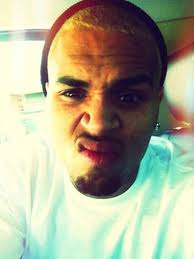 Newly Blonde Chris Brown is letting it all hang out after a nude photo of him leaked over this past weekend.

This past weekend a nude photo of the 21 year old actor and R&B superstar was leaked by an alleged ex-girlfriend. Sources say that the photo of Brown is a couple months old and that him an the alleged leaker had been broken up for months but being that Brown's new hair just surfaced a couple weeks ago it is believed that this photo is semi new. Some people believe that this photo is just another celebrity publicity stunt put together by Brown and his camp to boost album sales for his new album.

Celebrity Nude photo seem to be the new "It Thing" for Celebs. Celebrities are very careless about their photos and whom they take and share them with but these type of publicity stunts seem to always boost album sales and merchandising. Could these prove to be the next best thing for all musicians and actors to do? Hmm the world may never know.
at 1:19 PM