TMZ was approached several days ago by someone claiming to have the sex tape. The person sent them a short video and two photos. They said that they would keep it PG-13 and just say ..." the people in the video are both givers." The video and photos are clear enough to tell that it's Usher and Tameka. Sources close to Usher without specifically admitting the existence of a sex tape said that they believe this video could have been among the things Usher had stolen out of his car back in December 2009. Usher reported more than $1,000,000 worth of jewelry and electronics taken including two laptop computers. No Representatives from Ushers camp have confirmed or declined this information. 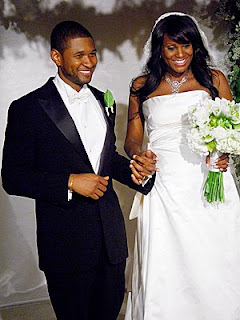 Allegedly the new owner of the video is attempting to sell the video and make millions off of it. Tameka and Usher have been divorced after being married for nearly two years. The two had been seperated for some time whe Raymond  flew to be by Fosters side after a Plastic Surgery event caused her to go into cardiac arrest.

Of Course sex tapes are a very common thing in the Celebrity world. Just about every Celebrity from Paris Hilton to Ray J and Kim Kardashian have done sex tapes and mainly to boost there careers. To a lot of people it help ease the fantasy of having sex with their favorite celebrity. A lot of people look at the tapes and say damn I want to see more and support them even more after they see what they are packing. Hmm I guess another bites the Celeb Nudity Bus.
at 2:01 PM