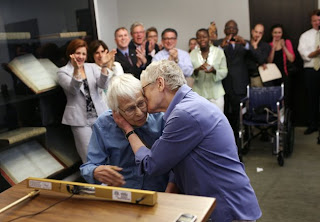 NEW YORK/NIAGARA FALLS, New York (Reuters) - Wedding fever hit New York on Sunday, as hundreds of gay and lesbian couples lined up to be married on the first day that same-sex marriage was legal in the state.

Kitty Lambert, 54, and Cheryle Rudd, 53, from Buffalo, New York, were married just after midnight at Niagara Falls' State Park's Luna Island, with the traditional honeymoon capital Niagara Falls as a backdrop.
Lambert, an art gallery manager, choked up during the religious service, answering "Yes, yes, yes!" when asked if she was making the choice of her own free will.
"We're achieving that real American dream to be treated like everybody else and be protected under all those laws," Lambert said later.

The women danced on stage after being married to pop star Lady Gaga's "The Edge of Glory."

In New York City, couples and their families and friends formed a line around the block to be married at Manhattan's marriage bureau.

The first to be wed were Phyllis Siegel, 77, and Connie Kopelov, 85. The couple, who have been together for 23 years, emerged triumphant from the city clerk's office, and Kopelov, in a wheelchair, brandished their marriage certificate as a crowd of supporters cheered.

Officials, expecting a rush of gay couples wanting to get married, initially set a lottery capping the number of marriages on Sunday to 764 couples but later accepted all 823 couples across all five city boroughs.

Douglas Robinson, 60, and Michael Elsasser, 56, said they were particularly happy because their two adopted sons, Zachary and Justin, were there to support them as they got married.

"The state recognizes us as a real family now," Robinson, who works at a bank, said, adding "even though we've always known we were a family.

"The next step is to get full equal rights with the federal government," Robinson said.

New York City Council speaker Christine Quinn told reporters she is planning her own wedding with longtime partner Kim Catullo but not before next year. Quinn, who is widely expected to run for mayor, said the marriages were a triumph for human rights.


"Marriage equality is alive and well in every borough in New York City," she said.
at 9:46 PM