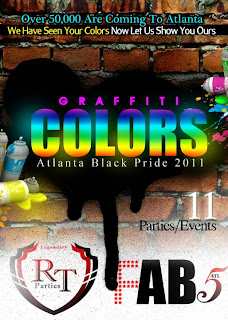 So of course event though I was not in ATL you know I had to have a correspondent. This time it was Mr Redd Alexander. Its good that we had Redd to because he was able to give us the inside Scoop on all the events and much much more.

ATLANTA, GA.- Last weekend Atlanta hosted the 15th Annual Black Gay Pride. People from everywhere invaded the city to celebrate Life, Love & Happiness. With the help of social media sites such as Facebook, Twitter, Blogtalkradio etc. over 10,000 gay men showed their Pride throughout the metro area. Atlanta Promoters, Fab5Atl & RT Parties hosted 15 events entitled Colors 2011 "Graffiti". They kicked off Pride Wednesday Night at Primal Nightclub with a Meet & Greet followed by an afterparty at Studio 63, 700 Marrietta St. Downtown hosted by Ginuwine Entertainment. Thursday Night, the men took to the city and partied at Club New York for a pre-Labor Day weekend jump off which ended with another afterhour party at Studio 63. Now here is when the weekend became "Official". The men began meeting & greeting each other Friday at Lenox Mall in search of the perfect fashion or date to step out on the Atlanta nightlife scene. Some succeeded where others failed but nevertheless they were ready to jump start Pride at the World Famous Club Rain for the largest block party & concert Black Pride had ever seen. It was literally a BLOCK PARTY with over 6000 men in attendance inside 2 clubs & covering the entire venue parking lot where bars, VIPs, photobooth and stage were setup. Award-winning MC Kidd Dupree & co-MC Auntie Snikers hosted the event and introduced former Destiny's Child member & solo artist LeToya Luckett. Also featured was SoSo Def's artist Dondria & the soulful, sexy Miss KeKe Wyatt blew the crowd away with her sultry voice. The artists sang and entertained the masses while 4 Dj's kept the clubs rocking in the background to keep everybody happy. 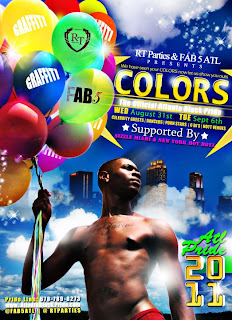 Also at Club Rain there was a mini fashion show, a rendition of Beyonce "Who Run the World" , Black Rayne Productions Porn Models TrapBoyy, Jermany & crew were in attendance signing autographs & giving away videos, followed by the afterparty at Studio 63. After a brief nap, the fun started again Saturday night for the 21 & up at Club 91 with 20 super sexy strippers, 10 porn models & a show that kept the crowd KlimaxXxing. The 25 & up party goers had got their life in upscale Buckhead at the Academy Ballroom for the Grown & Sexy Party which was again followed by the afterhour set. By Sunday night the men of Pride were ready to slip into Cream Ultra Lounge and get their sexy on. Joining the VIP of Cream, special guest Amerie shut down the Dj and sang accapella for her many awaiting fans and admirers. She partied with the crowd while tweeting, 'You guys Rock!' and posing for photo ops with media. The party continued with Deejay Maestro moving the dancing floor til 5am while also becoming a trending topic on Twitter. After a night in Cream the men of Pride were ready to get one more party in before they departed Atlanta and of course they had to attend the Monday night event at Glow Nightclub. The event was Free all night and definitely had the crowd thirsty for more fun. When the last song played at Glow the doors to Studio 63 bust open and the party continued til 7am with Deejay Scrilla on the 1's & 2's. All in all the entire weekend was succesful and definitely a Legendary Experience for everyone.
at 3:31 PM