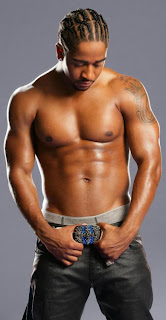 Earlier this year news broke that R&B Superstar Omarion was gay. News came after former bandmate outed everyone in the group on how they were raped and molested by former manager Chris Stokes. But those rumors were stopped by Omarion's camp.

Today in a statement released by Omarion he had this to say, “I pride myself in being an honest, God Fearing, respectful man. I have kept my personal life private and wanted to keep it that way. Unfortunately, other’s are interested in profiting from my anguish; so before they can do that, i will clarify things. I am not at all what certain ex-band members are trying to paint me as, I am however a respectable, mature, proud, bisexual man.”

Raz B, a former member of the platinum selling group B2k, along with his brother spoke to H8terade Radio and outed Omarion as gay. Omarion, who is working on his fourth album did not elaborate further. So I guess now we know why Omarion's butt is so big.
at 9:46 AM