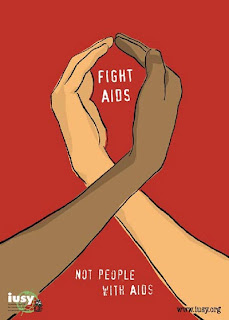 ﻿
World AIDS Day is held on 1 December each year and is an opportunity for people worldwide to unite in the fight against HIV, show their support for people living with HIV and to commemorate people who have died. World AIDS Day was the first ever global health day and the first one was held in 1988. More than 90,000 people are currently living with HIV in the UK and globally an estimated 33.3 million people have HIV. More than 25 million people between 1981 and 2007 have died from the virus, making it one of the most destructive pandemics in history. World AIDS Day is an opportunity for you to learn the facts about HIV and put your knowledge into action. If you understand how HIV is transmitted, how it can be prevented, and the reality of living with HIV today - you can use this knowledge to take care of your own health and the health of others, and ensure you treat everyone living with HIV fairly, and with respect and understanding.

Email ThisBlogThis!Share to TwitterShare to FacebookShare to Pinterest
Labels: Dieing for a NUT, World Aids Day