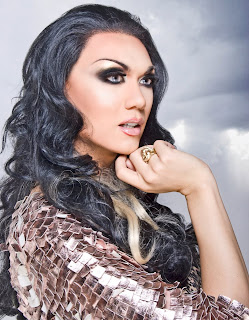 So I am really pleased and excited to present this interview to you all. Manila Luzon is none as 1/4th of the Heathers from Rupaul's Drag Race. Trust me you all will get to know her better throughout this interview.

Who is Manila Luzon?
I don't know... I've never heard of her. Ha! Seriously, Manila Luzon is just me...just with a pound of make up, a giant wig and some sick'ning shoes!

What made you choose the name Manila Luzon?
I never wanted to start drag until I had the perfect name. So when I finally picked a name that I thought suited me, I was ready for the beat! I named myself after the birthplace of my mother, the capitol of the Philippines. And Luzon is the island that Manila is located! I also liked the idea that "man" was in the name because I'm a sucker for clever drag names like Ella Vader or Anita Cocktail; I was just not that clever. And Manila has the same number of syllables as Madonna! 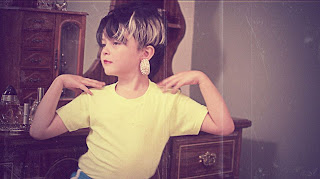 What was your childhood like?
My childhood was pretty normal, honestly. Me and my younger sister were raised by normal parents (who just celebrated 33 years together) in the suburbs of Minnesota. As a family we must have looked very interesting to the passerby, a little Filipino woman, a tall red-bearded white husband and their two adorable mixed children in a sea of white Minnesotans. Although I've always knew I looked different from my white classmates, I never felt too different...except for the fact I figured out I was sorta a giant homo!

What is your coming out story?
It was a rough one. I figured out I liked boys when I was 11, I think. But in high school I thought I might as well give dating girls a try. I had a very beautiful girlfriend through high school and college. She was a ballerina so I think she had enough self issues (ie Black Swan) that she didn't even notice just how gay I was. But when she finally figured it out and made me come out, I had to deal with coming out when i was not quite ready and a break up with someone who I really cared for. It was an emotional time, but I made it through the wilderness, somehow I made it through!

Do you have any regrets about your childhood and the way you came out? Why?
I don't try to have regrets. I can't change things that happened in the past. Maybe I could have had the strength and confidence to come out when I was younger so I could have spent even more of my younger years being my fabulous self! 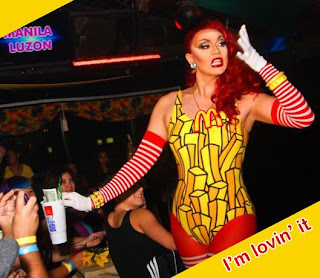 What sparked you interest in the world of female impersonation?
I am not sure. I just have always liked the clothes my little sister got to wear more than the stuff my mother would dress me in. Why did I have to wear pants and a sweater vest when she got to wear a fabulous new Easter dress with lace gloves and a matching bonnet?

Who would you say was your major influence into female impersonation?
This is always such a hard question because I like to be influenced by everything and everything! Definitely my mother! I have a very cartoony aesthetic that I think I get from how my mother dressed me as a little boy. I was always matching! Everything was brightly colored and color coordinated. Also my drag on drag boyfriend/girlfriend Sahara Davenport (season 2). I've learned so much of the tricks of the trade from her! Sahara inspires me everyday.

What inspires your many Drag looks?
I like my drag looks to be relatable in some way. I want someone seeing me to have an instant connection with my look. That's why I like to dress up in fashionable takes on everyday objects; I've worn a pineapple dress, a Big Bird dress, a gold fish dress, even a Hostess Cupcake dress!

What does the art form of female impersonating mean to you?
Before I consider myself a drag queen, I think of myself as an artist. I love so many kinds of art: theater, painting, drawing, sculpture, design. I have a BFA in graphic design, and worked at a design firm in NYC for years. But now that I've been on the show and I'm focusing on drag, I am applying all my creative energy into my drag! It is my creative outlet that has aspects of all the kinds of art blended into one. 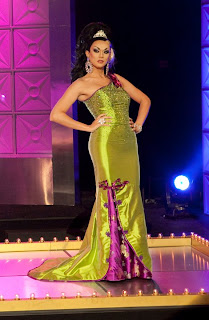 Who or what made you audition for Rupaul's Drag Race?
When Sahara Davenport heard of the show I really pushed her to audition. It was so much fun watching her do her thing for the whole world to see. She had the opportunity to show her extreme talent (she may have the best lip sync in Drag Race history when she turned out the stage in ballet point shoes) and when she didn't do as well in the competition that i knew she should have, I thought I would take my chance and pick up where she left off!

What was the first day of the competition like for you?
It was like a dream. It was a very new experience. I felt like an alien visiting Earth for the very first time! A really really sexy and beautiful alien!

Who from the beginning would you say you formed an instant bond with?
I instantly clicked with Delta Work. The first day in the holding area before we were to do our trampoline photo shoot with celeb photographer Mike Ruiz we were not allowed to talk to the other contestants, but Delta and I had the only kiki just making facial expressions and the occasional animal sound effects!

What would you say formed the bond between yourself, Carmen, Raja and Delta (The Heathers)?
I've known Carmen for years working on the NYC scene together, so it was great to see a familiar face (and booty) on the show. Raja and Delta were friends for years because they're both from the LA area. I fell in love with Raja because we were very similar (even if producers tried to pit us against each other at first). Our two groups formed into one. We all hold our drag aesthetic extremely high, and had no problem striving for bigger, better and more beautiful things. Although we were painted to be "popular" girls and snobby, it really was not like that. Sometimes when you are good at what you do and confident about yourself, people are quick to let their own insecurities try to tear you down. And if you call people out on that, you get labelled a bitch. But whatever...It's a friendship and sisterhood that is still going strong, even though we rarely get to see each other. 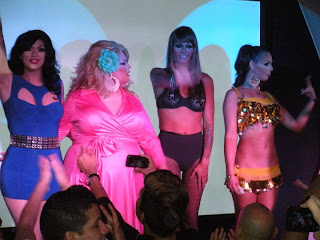 What would you say was your favorite challenge throughout the entire season?
I really enjoyed the news caster challenge (and not just because I won) but because it was really fun to play. It was like playing make believe in my basement with my childhood friends.


How did you feel when they brought Shangela back to compete?
All I know is the cameras caught a great reaction shot from me when Shangela popped out of the box. It really wasn't a reaction to Shangela herself, but more of a realization that there was one more girl to compete with. Besides, I knew DJ for a few years because he went to school with Sahara and he's always fun to hang around with. Who knew we'd butt heads the way we did?

How would you rate your overall experience? Why?
I loved every minute of it. I feel lucky that I made it to the end. Sure it would have been nice to win, but at least I was there for the whole ride and got to experience everything that was dished out. 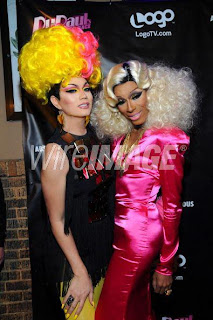 What would you say Rupaul's Drag Race has taught you about yourself as a Female Illusionist and as a person?
I've learned so much about myself because of that show. I’ve discovered that I love being creatively challenged and I try to do that every day since the show. It's really improved the way I do my drag now. I have to make sure I am put together at all times now, no slacking. And that's great because it forces me to try and to be motivated. Also it's changed the way I act. I feel like it's made me grow up and be more responsible.

Since the show has ended what has your life been like?
My life is busier than ever. Now that it's been over a year since I've been on TV I'm working hard to make sure my fans from the show are still able to get their Manila fix! I'm busy touring all around the world, working on music and music videos, I've been popping up on any reality tv show that films here in NYC. I'm trying to move forward with this whole drag career. It's hard but it's so much fun!

On the show you announced your relationship with Sahara Davenport. Do you all find it difficult as female illusionist to date?
It has some rough moments, but it's so much fun to be in a relationship with someone who is as passionate about drag as I am. Sahara had been doing it as a career ever since we started dating and I basically convinced her to stop auditioning as back-up dancer-third-to-the-left and be the star as a drag queen. It's a very competitive profession, so it's great to have someone have your back! And besides we share shoes!

What would you say is the driving force behind you all relationship?
Sahara and I are best friends who love to be creative together. We are always brainstorming amazing ideas together!

What is it as a female illusionist that you wish to accomplish in the LGBT community?
It's still crazy to be told I'm a role model, but I just want people to be themselves, not take life so seriously, and feel beautiful while doing it! 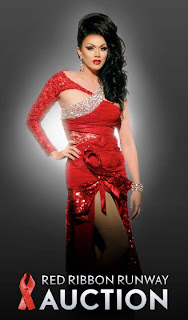 Where do you see yourself 5 years from now?
I have no idea. but there will be a wig and a fierce pair of pumps close by.

Do you have any last words for your fans and viewers?
I love my fans (FANILAS) and they keep me motivated and keep me striving to do fabulous things. I can get tripped up on pleasing my fans sometimes, but it's all good, becasue it's so rewarding! I've got fabulous things for my Fanilas to enjoy!
at 12:08 PM