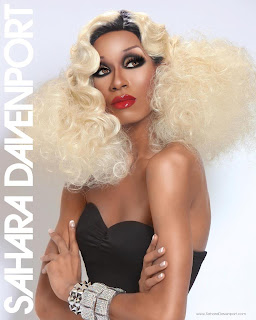 Various sources are reporting Sahara Davenport, one of the more popular contestants on Season 2 of RuPaul’s Drag Race—and partner to fellow Drag Race entrant Manila Luzon—has passed away at age 27.
As Antoine Ashley, Davenport was born and raised in Dallas and attended Southern Methodist University, where he earned a BFA in dance. After moving to New York, Davenport scored appearances in One Life to Live, Judge Karen and the video for David Guetta and Chris Willis’ “Gettin’ Over.”
In addition to a successful performance career, Davenport released two singles: “Pump with Me” (2010) and “Go Off” (2011).
Though details have yet to emerge about Davenport’s passing, Drag Race judge Michelle Visage confirmed the death via Twitter: “It’s true and I have no words. Have to sign off for now kids, can’t handle this. XOXO.”
Other Drag Race performers took to social media to extend their condolences: “A beautiful angel has been added to Heaven. Rest in peace my sweet friend,” tweeted Jujubee. “We will miss you, Sahara Davenport.” While Season One winner Bebe Zehara wrote, “I am deeply saddened and at a lost for words. @SaharaDavenport – I Love you sis.”
Luzon tweeted simply, “I love him so much. “