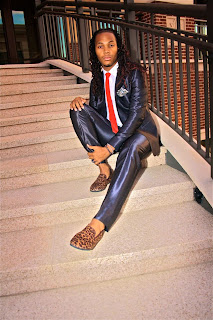 "I feel like that's become part of my calling. God has placed me in a position to be able to help artists who otherwise may never have been heard in the music business", says Insane P of the divine order his career has taken. The event being held at Tabu, Philadelphia from 5-7pm is to recognize inspiring local individuals from various industries who have made a tremendous impact in their given line of work and/or career.

If being an inspiration is a prerequisite, than INSANE P is the poster child for this honor. Having fought and beat brain cancer in his early 20's, he defied all the odds even after being told he'd
never walk again, and has become a symbol of strength, hope, courage and a testament to the human spirit, not only to those who love him, but on a global level. The Jersey native/Philadelphia resident has become a staple in both the mainstream and independent music communities. A line not straddled well by many in such a "boundary oriented" industry. Proving his breathtaking talents knows no boundaries. Visit his youtube page: InsaneP1984 to hear his timeless hits, and keep an eye out for insanep.com coming soon!

Despite both his personal and professional triumphs, INSANE P remains ever humble giving all glory to God for his accomplishments. "I'm in shock! I've never been honored for anything in my life", a gracious INSANE P exclaims. However we think this is the first of many honors due a very deserving and inspiring individual. Congratulations INSANE P! We salute you.
at 5:10 PM