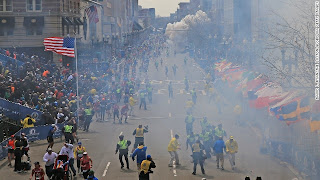 Investigators are pleading for help in hunting down those responsible for a pair of bombings that left a gruesome scene at the Boston Marathon.


The blasts, which killed an 8-year-old boy and two other people, marked a grotesque end to what should have been a celebration of triumph. One man's legs were instantly blown off, yet he kept trying to stand up. Exhausted marathoners had to muscle the energy to flee the bloody scene.
And more than 150 people were hospitalized, some in critical condition.
"No piece of information or detail is too small," the FBI Boston Division said, asking the public for any information or images that might provide clues.
Investigators don't know the motive for the bombings and don't have a specific suspect, nor have they found any surveillance video showing the bombs being placed, a law enforcement source told CNN on Tuesday.
While authorities search for answers, many are at a loss to explain why anyone would target an annual event that celebrates thousands of runners from around the world.
Continue Reading......﻿
at 9:51 AM

Email ThisBlogThis!Share to TwitterShare to FacebookShare to Pinterest
Labels: Around the World, In The News