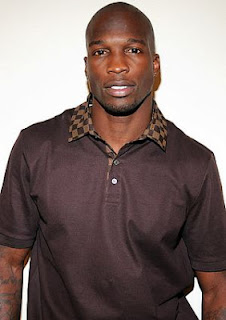 Ex-NFL wide receiver Chad Johnson, formerly known as Chad “Ochocinco,” was arrested in Florida after violating his probation,  according to a report from TMZ.


Broward County had issued a warrant earlier this month after Johnson failed to report to his parole officer on two separate occasions. The wide receiver appeared today in a Broward County courtroom, where a judge ordered him to be arrested and jailed, according to the report. Johnson was out of the state of Florida before being called to court.

The 35-year-old Johnson was a member of the Miami Dolphins when he was arrested last August after being accused of head-butting then-wife Evelyn Lozada in a vehicle. Johnson pleaded no contest and received probation. The Dolphins released Johnson after the arrest.

Johnson has not played a down in the NFL since the 2011 season, when he was a member of the New England Patriots. He last took the field in the Patriots’ loss to the New York Giants in Super Bowl XLVI.
at 4:19 PM