Crews Search for Survivors in Oklahoma After Tornado 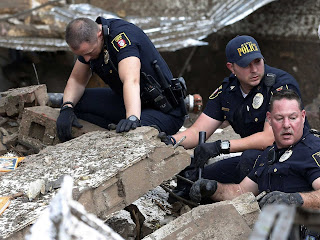 Emergency crews and volunteers continued to work Tuesday morning in a frantic search for survivors of a massive tornado that ripped through parts of Oklahoma City and its suburbs, killing dozens of people and flattening whatever was in its path, including a hospital and at least two schools. Much of the tornado damage was in the suburb of Moore, where rescue workers struggled to make their way through debris-clogged streets and around downed power lines to those who were feared trapped under mountains of rubble. Rescue workers equipped with thermal-imaging equipment and dogs sifted through plywood boards, upended cars and steel beams where houses and shops once stood.


Officials said Tuesday that it was far too early to say how many people had been killed. On Monday night, Amy Elliott, the spokeswoman for the Oklahoma City medical examiner, said at least 51 people had died and 40 more bodies were on their way, but on Tuesday, Ms. Elliott said that count “is no longer accurate.”
As of Tuesday morning, the medical examiner had confirmed 24 deaths, nine of them children, she said.
On Monday night, hospitals reported at least 145 people injured, 70 of them children.
The risk of tornadoes throughout the region remained high Tuesday, according to the National Oceanic and Atmospheric Administration’s Storm Prediction Center in Norman.
President Obama, who declared a federal disaster in five Oklahoma counties, said Tuesday at the White House that the tornado had been “one of the most destructive in history,” and that he had informed aides that “Oklahoma needs to get everything it needs right away.” He said Federal Emergency Management Agency officials had been dispatched to Moore to aid in the recovery effort.
“For all those who’ve been affected, we recognize that you face a long road ahead,” Mr. Obama said. “In some cases, there will be enormous grief that has to be absorbed. But you will not travel that path alone.” 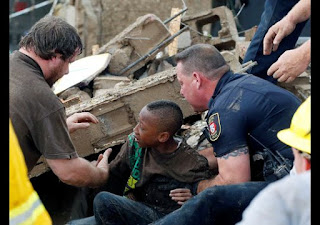 Plaza Towers Elementary School in Moore was reduced to a pile of twisted metal and toppled walls. Rescue workers were able to pull several children from the rubble, and on Tuesday, as a chilly rain swept through the area, crews were still struggling to cut through fallen beams and clear debris.
“We are still definitely in search-and-rescue mode.” Jayme Shelton, a Moore spokesman
At Briarwood Elementary School in Oklahoma City, on the border with Moore, cars were thrown through the facade and the roof was torn off.
“Numerous neighborhoods were completely leveled,” Sgt. Gary Knight of the Oklahoma City Police Department said by telephone on Monday night. “Neighborhoods just wiped clean.”
He said debris and damage to roadways, along with heavy traffic, were hindering emergency responders as they raced to the affected areas.
A spokeswoman for the mayor’s office in Moore said emergency workers were struggling to assess the damage.
“Please send us your prayers,” she said.
Shortly before midnight, the area near the Plaza Towers school was eerily quiet and shrouded in darkness from a widespread power outage. Local authorities and F.B.I. agents patrolled the streets, restricting access to the school.
Half a mile from the school, the only sounds on Southwest Fourth Street were of barking dogs and tires on wet pavement littered with debris. Hovering in the sky, a helicopter shined a spotlight on the damaged neighborhoods. In the darkness, the century-old Moore Cemetery was a ghostly wreck: women’s clothing and blankets clung to the branches of tilting trees and twisted sheets of metal ripped from nearby buildings or homes were strewn among the graves. Many headstones had been pushed flat to the ground by the wind.
Brooke Cayot, a spokeswoman for Integris Southwest Medical Center in Oklahoma City, said 58 patients had come in by about 9 p.m. An additional 85 were being treated at Oklahoma University Medical Center in Oklahoma City.
“They’ve been coming in minute by minute,” Ms. Cayot said.
The tornado touched down at 2:56 p.m., 16 minutes after the first warning went out, and traveled for 20 miles, said Keli Pirtle, a spokeswoman for the National Weather Service in Norman, Okla. It was on the ground for 40 minutes, she said. It struck the town of Newcastle and traveled about 10 miles to Moore, which has a population of about 55,000
at 11:35 AM

Email ThisBlogThis!Share to TwitterShare to FacebookShare to Pinterest
Labels: In The News, top stories