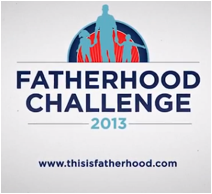 Our nation’s first multi-media “Fatherhood Challenge” starts this week
Grammy award winning hip hop artist Lecrae and World Champion basketball player Dwyane Wade join forces for the launch of the National Campaign “This Is Fatherhood”. The campaign will begin with the nation’s first ever “Fatherhood Challenge”, where contestants will submit a song, photo, video or an essay that answers the question, “What does fatherhood mean to me.” The call to accept submissions started May 6th on the “thisisfatherhood.com” website. Participants will compete for cash prizes and a trip to Washington D.C.
and an array of pre-eminent nonprofit and media organizations. The Fatherhood Challenge is one of the first initiatives of its kind that takes a preemptive approach toward the fatherless crisis by creating awareness of the issue among youth and adults alike through utilizing the power of social media and emerging technology.
“This Is Fatherhood” is a cohort of cultural influencers and organizations devoted to restoring America’s commitment to healthy fatherhood

About Dwyane Wade
Dwyane Wade is a two-time NBA Champion (2006, 2012) and nine-time All-Star selection with the Miami HEAT. In 2004, he created the Wade’s World Foundation, which provides support to various educational, health and family service programs. In September 2012, he became a New York Times Best- Selling author, with the release of his first book, A FATHER FIRST: How My Life Became Bigger than Basketball. A Father First, will be released in paperback on May 14th.
About Lecrae
Reach Records recording artist Lecrae has released 5 studio albums starting in 2004 with his debut album Real Talk. Since then he has appeared on top of the Billboard charts, received several awards for his musical contributions and toured the world. In February 2013, Lecrae made history as the first rapper to win a Grammy Award in the “Best Gospel Album” category for his studio album GRAVITY, which released in September 2012 and debuted at #3 on the Billboard Top 200 and #1 on the Rap Charts with over 73K units sold.
CONTACTS For Dwyane Wade: Amy Jacobs | ajacobs@rubenstein.com | (212) 843-8077  Lecrae: Tasha Stoute | tasha@thechambergroup.com | (212) 366- 5801 General Campaign Inquiries: Art Hooker | Art@thisisfatherhood.com | (202) 417-7406
at 5:48 PM