Nicollette - "I'm Not An Angel" 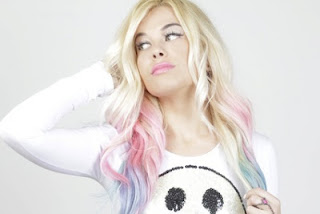 Twenty-three-year-old pop princess Nicollette is one of those exceptional artists who simply can do it all. Using her powerful yet angelic voice, energetic pop production and universal appeal, this blue-eyed, blonde bombshell ignited a cult-like online following to empower young women with good music and prove that girls indeed just want to have fun.
With an assortment of infectious upbeat singles boasting an eclectic blend of infectious beats, driving choruses and Nicollette’s soothing soprano coupled with an alluring attitude, she is quickly becoming one of the most recognizable voices in popular music.
With her forthcoming singles “Crawl” and “Screwed” surgically under construction, Nicollette is well on her way to a promising career. She has been perfecting her craft working alongside incredibly talented producers such as Roc City, Verse Simmonds, The Soul Diggaz and Multiman.
If that were not enough, Nicollette currently became the fresh, new face of New York-based clothing line Mixology.
“Young kids are drawn to me because I’m confident, yet approachable, and I lead by example,” says Nicollette. “I have always noticed that young kids emulate what I do. So I have a responsibility to be a positive role model."