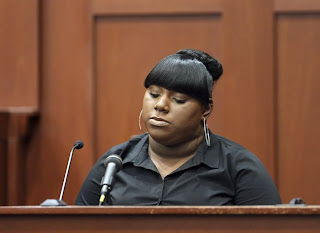 A friend who was on the phone with 17-year-old Trayvon Martin moments before he was fatally shot by George Zimmerman testified that she heard the Miami teen shout, "Get off! Get off!" before his telephone went dead.

Rachel Jeantel recounted to jurors in Zimmerman's second-degree murder trial how Martin told her he was being followed by a man as he walked through the Retreat at Twin Lakes townhome complex on his way back from a convenience store to the home of his father's fiancee.

Jeantel is considered one of the prosecution's most important witnesses because she was the last person to talk to Martin before his encounter with Zimmerman on Feb. 26, 2012.

She testified that Martin described the man following him as "a creepy-ass cracker" and he thought he had evaded him. But she said a short time later Martin let out a profanity.

Martin said Zimmerman was behind him and she heard Martin ask: "What are you following me for?"

She then heard what sounded like Martin's phone earpiece drop into the grass and she heard him say, "Get off! Get off!" The phone then went dead, she said.

Zimmerman, 29, could get life in prison if convicted of second-degree murder for killing Martin. Zimmerman followed him in his truck and called a police dispatch number before he and the teen got into a fight. 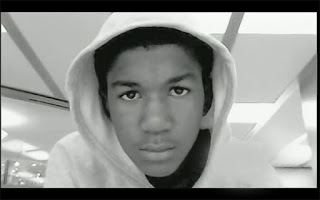 Zimmerman has claimed self-defense, saying he opened fire after the teenager jumped him and began slamming his head against the concrete sidewalk.

Zimmerman, whose father is white and whose mother is Hispanic, has denied the confrontation with the black teenager had anything to do with race, as Martin's family and its supporters have claimed.
Jeantel's testimony came after two former neighbors of Zimmerman testified Wednesday about hearing howls and shouts for help in the moments before the shooting.

Jayne Surdyka told the court that immediately before the shooting, she heard an aggressive voice and a softer voice exchanging words for several minutes in an area behind her townhome at the Retreat at Twin Lakes.

"It was someone being very aggressive and angry at someone," she said.
During the struggle, she said, she saw a person in dark clothes on top of the other person. Martin was wearing a dark sweatshirt and Zimmerman wore red clothing. Surdyka said she saw the person who was on top get off the body after the shot was fired.

Surdyka said she heard cries for help and then multiple gunshots: "pop, pop, pop." Only one shot was fired in the fatal encounter.

"I truly believe the second yell for help was a yelp," said Surdyka, who later dabbed away tears as prosecutors played her 911 call. "It was excruciating. I really felt it was a boy's voice."
During cross-examination, defense attorney Don West tried to show there was a lapse in what Surdyka saw. Defense attorneys contend Martin was on top of Zimmerman during the struggle, but after the neighborhood watch volunteer fired a shot, Zimmerman got on top of Martin.
West also challenged Surdyka about her belief that the cry for help was a boy's voice, saying she was making an assumption about whose voice it was.

Jeannee Manalo testified after Surdyka that she believed Zimmerman was on top of Martin, saying he was the bigger of the two based on pictures she saw of Martin on television after the fight. Manalo also described hearing howling, but she couldn't tell who it was coming from, and then a "help sound" a short time later.

Under cross-examination, defense attorney Mark O'Mara asked why she had never mentioned her belief that Zimmerman was on top in previous police interviews. He also got her to concede that her perception of Martin's size was based on five-year-old photos she had seen of him on television that showed a younger and smaller Martin.

Martin's parents have said they believe the cries for help captured on 911 calls made by Zimmerman's neighbors came from their son, while Zimmerman's father has said he believes the cries belong to his son. Both prosecutors and defense attorneys believe they could show whether Zimmerman or Martin was the aggressor in the encounter. Defense attorneys successfully argued against allowing prosecution experts who claimed the cries belonged to Martin.

Before the February 2012 shooting, Zimmerman had made about a half dozen calls to a nonemergency police number to report suspicious characters in his neighborhood. Judge Debra Nelson on Wednesday ruled that they could be played for jurors.

Prosecutors had argued that the police dispatch calls were central to their case that Zimmerman committed second-degree murder since they showed his state of mind. He was increasingly frustrated with repeated burglaries and had reached a breaking point the night he shot the unarmed teenager, prosecutors say.

Defense attorneys argued that the calls were irrelevant and that nothing matters but the seven or eight minutes before Zimmerman fired the deadly shot into Martin's chest.
Seven of the nine jurors and alternates scribbled attentively on their notepads as the calls were played.
at 5:13 PM

Email ThisBlogThis!Share to TwitterShare to FacebookShare to Pinterest
Labels: In the Community, In The News, R.I.P., Trayvon Martin