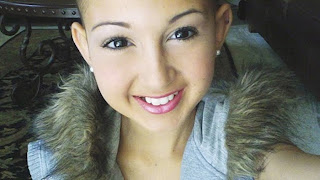 Talia Joy Castellano, the young YouTube star who delighted and inspired millions with her ebullient spirit and love of life has died after a long, bravely fought battle with cancer.


It was impossible to encounter the 13-year-old without being moved by her. Her pixie-ish humor and bubbly personality were grounded by an uncanny wisdom. After she lost her hair from chemotherapy, rather than wear a wig, she started playing with makeup to boost her self-confidence and eventually broadcasted beauty tutorials online. Her videos often receive over 500,000 views, and one has been watched over 8 million times.

Talia was first diagnosed with neuroblastoma, a rare and aggressive form of cancer in 2007, when she was only 7 years old. She was treated and went into remission, but the following year, the disease returned and she was also diagnosed with leukemia. Intensive medical intervention failed to arrest her condition and in late April, she was admitted to the MD Anderson Cancer Center in Orlando, Florida for tests and radiation therapy and was later moved to the Arnold Palmer Hospital for Children. Her mother, Desiree, kept fans and well-wishers up to date with detailed posts on her Facebook page, Angels for Talia.


On Tuesday afternoon, an update on the Angels For Talia page announced the tragic loss:
“It is with a heavy heart that we share with all of you that Talia has earned her wings at 11:22am. Please lift her beautiful soul, her beautiful light to heaven and please send your love and prayers to her family during this most difficult time. God speed little one, may you be free from pain and suffering, may your soul feel the light and love that you brought to so many of us on this Earth during the short time you were her with us. We will miss you more than you will ever know baby girl.”

As news of her passing spread across social media, mourners paid their respects on Twitter.


Along with a photo of the young beauty blogger, CoverGirl released the following statement on their Twitter account: "Talia Castellano was the meaning of a true COVERGIRL"

Ellen DeGeneres also paid tribute to Castellano, tweeting "This year I met a very special girl, and today we lost her. Sending my heart to Talia's family. I'm so sad."
at 5:25 PM

Email ThisBlogThis!Share to TwitterShare to FacebookShare to Pinterest
Labels: In The News, R.I.P., top stories