A Prince is Born 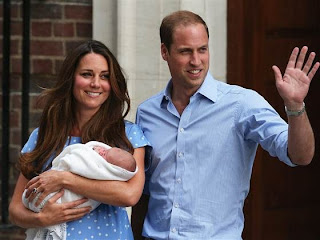 2 years after the royal wedding Prince William and Princess Kate give birth to a beautiful baby boy Monday. Tuesday Kate and Will and the baby made their first appearance after only giving birth 24 hrs prior. At the time it was still unclear what they would name him but as news broke out early this morning his name is rather royal. Prince George Alexander Louis is what they will call him and he will be the future King of England. We want to wish them all the best.

Email ThisBlogThis!Share to TwitterShare to FacebookShare to Pinterest
Labels: In the Community, In The News, Will and Kate