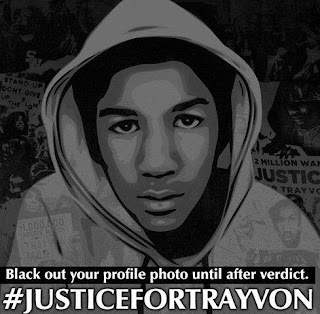 Everyone begins to be on pins and needles today as the George Zimmerman trial draws to a close.  Today day prosecutor  Bernie De La Rionda began the prosecutions closing arguments saying "A teenager is dead! He is dead of no fault of his own." Which struck a nerve in everyones mind. De La Rionda went on to tell how many false statements were made on the account of Zimmerman and how there were to many inconsistencies in his story. But the prosecutions case was made today just by the words and innocent teenager is dead and is no longer walking here on earth.

Tons of Trayvon Martin's family supporters from Celebrities to bloggers and even everyday citizens took to social media this afternoon asking that people to black out there profile pics on social media sites until after the verdict. It is expected that a verdict can be reached as early as Saturday but both sides are worried of the reaction of the outcome. Trayvons family have asked the public to not act in violence if Zimmerman isn't convicted. So please take heed people out of respect for Trayvon Benjamin Martin please be peaceful and no if the justice system does not prevail God will.

Email ThisBlogThis!Share to TwitterShare to FacebookShare to Pinterest
Labels: In the Community, In The News, top stories, Trayvon Martin