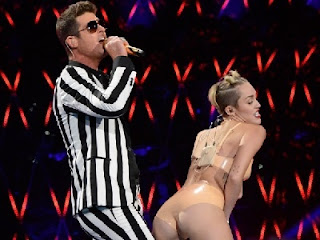 Former Child star Miley Cyrus has lost her mind. In a performance in the 2013 VMA's which aired yesterday, Cyrus gave a rather breath taking, raunchy and all out disgusting. Spectators and on lookers which included the Smith Family faces appeared shocked and applaud at her performance. But to top it off 20yr old Cyrus ended her performance twerking on 36yr old Robin Thicke.  Here is the video link..... let us know what you think