Beyonce gets Pulled off Stage During Concert 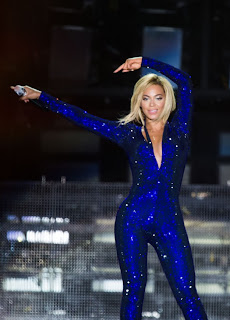 King Bey has been having a hard time out on the road this year. First her long golden locks get caught in her hair fan and know an obsessed Brazilian fan jump on stage and basically pulls her off.
In a concert over the weekend in Brazil during Bey's performance of "Irreplaceable"  one of her fans jumps up as she bends down to do crowd interaction and pulls her down into the audience. Beyoncé's super hero body guards reach into the audience and grab her back onto the stage. They later go to escort the guy out of the arena when Beyoncé says, "Hey, Hey, Hey, It's Alright." and lets the guy stay to enjoy the rest of the concert. Do you think Bey was right for letting him stay?