George Zimmerman's estranged wife says he threatened her with gun 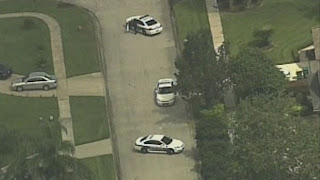 George Zimmerman's estranged wife has called police to her father's home Monday, saying the former neighborhood watch volunteer who was acquitted of the murder of Trayvon Martin threatened her with a gun.

Zimmerman is currently being questioned by police.
Earlier, he was in investigative detention and was being held handcuffed in the back of a police cruiser -- a procedure until probable cause is established for an arrest, Lake Mary Deputy Chief Colin Morgan told Fox News.

Lake Mary Police Chief Steve Bracknell says Shellie Zimmerman called police shortly after 2 p.m.
Bracknell told the Associated Press that officers are at the house trying to determine what happened.
"We've only heard one side of the story so far," Bracknell said.

Morgan said there are allegations that Zimmerman came to the home and Shellie's father was the aggressor in the incident. Police say Shellie told them that Zimmerman had his hand on his gun and became aggressive, then punched her father.

In the divorce petition, Shellie Zimmerman says she and her husband separated a month after Zimmerman was acquitted of any crime for fatally shooting Trayvon Martin last July.
Zimmerman's acquittal led to protests nationwide

Email ThisBlogThis!Share to TwitterShare to FacebookShare to Pinterest
Labels: In The News, top stories, Trayvon Martin