Is New York unwilling to elect a gay, woman mayor? 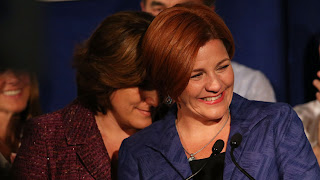 Quinn told reporters Thursday, referring to the city’s public advocate, who won roughly 40 percent of the vote in the primary compared to her 15.5 percent.

But Quinn also confronted a more uncomfortable suggestion: is New York City, viewed across the U.S. as a beacon of liberal, progressive politics, simply not inclined to elect a woman mayor, particularly one who is gay?

“There will be an amazing day where history gets made in this city and it will raise all of us higher. It hasn’t happened yet, but we are a city not incapable of anything,” she added. “This city is the greatest place, and that will happen, and it will happen soon."

Quinn received plenty of attention for the historic nature of her candidacy. But her campaign rarely tried to capitalize on that attention, in part because the candidate herself was reluctant to talk about her gender or sexuality. Her team didn't launch a major push to win over women voters until late in the campaign, when it was already clear de Blasio had gained a clear advantage among women.
One Quinn adviser, who declined to be named discussing the internal mechanics of the campaign, chalked up such missteps to a major misreading of the electorate by the candidate and her top advisers who had assumed that Quinn would win over female voters simply because she was a woman and that more New Yorkers would embrace her trailblazing candidacy, even if the candidate was hesitant to make that a key focus.
at 2:52 PM

Email ThisBlogThis!Share to TwitterShare to FacebookShare to Pinterest
Labels: In the Community, In The News, New York