Shooters on Grounds of Washington Navy Yard in Southeast D.C. 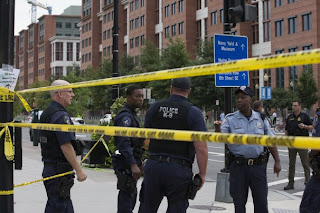 Police say three shooters, including at least one in fatigues, have shot at least 10 people and killed 4 at the Washington Navy Yard. Two law enforcement officers were wounded in the shooting.

Police said at least one of the shooters is “down,” but it was unclear whether that means the suspect has been arrested or shot. Two remain at large, and police believe they have pinned down one between the third and fourth floors of one of the buildings on the installation in Southeast Washington.

The shooting happened at about 8:20 a.m. at the headquarters of the Naval Sea Systems Command on Isaac Hull Avenue on the grounds of the historic Navy Yard.
We will continue to monitor the story as it develops.
at 10:54 AM

Email ThisBlogThis!Share to TwitterShare to FacebookShare to Pinterest
Labels: Breaking News, In The News, top stories