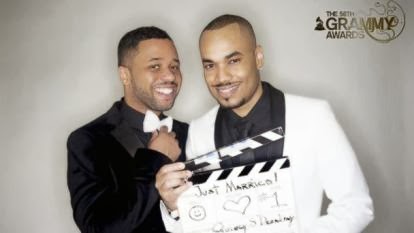 Quincy LeNear and Deondray Gossett were one of the lucky 33 couples married by Queen Latifah during Sunday's historic Grammys ceremony as hit single "Same Love" was performed by Macklemore & Ryan Lewis, out singer-songwriter Mary Lambert and Trombone Shorty. Madonna joined the performance with her song "Open Your Heart."  The couple now share the last name "Gossfield."

In a very candid interview with www.glaad.org the Gossett's share there experiences of the day. 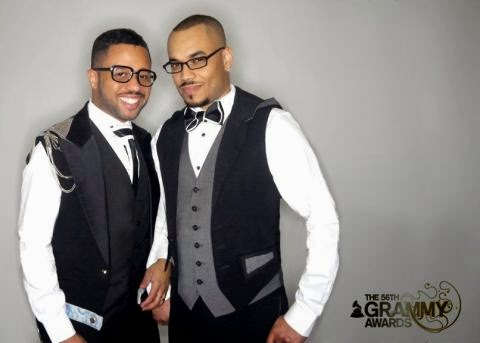 GLAAD: How did you end up becoming one of the couple's taking part in the Grammy ceremony?

DEONDRAY GOSSFIELD: We were recommended to casting by a mutual friend who was asked if he knew of any committed couples of color who could be ready for marriage.

GLAAD: We saw the ceremony , but what was the rest of the day like? Was it hard to keep it a secret from friends and family?

QUINCY GOSSFIELD: The day was certainly a long and nail biting day. We were brought into a large holding tent, draped and covered in red velvet, where all the couples would lounge for the remainder of the day.  It gave us an opportunity to meet and with the people we would be sharing this experience with, from all walks of life. We were met with champagne to toast one another and to take the edge off. However, the drinks were short lived to prevent indulging a little too much prior to our nuptials. Everyone from the staff to production of the Grammys were so warm and encouraging. In most cases they were more excited than us to witness this statement of love. I believe there was a general feeling that we were all a part of making history

DG: The secret was almost impossible to keep, but we navigated fairly well.  Quincy was so eager to let everyone know the news to ensure that they would watch.  I was more for the element of surprise.  I didn't want anyone to know until it was actually playing live on TV, so we just started telling people that we were producing a segment for Macklemore, which wasn't at all farfetched since we're TV producers.  Well, a leak from the New York press foiled all of that and the producers told us about four hours prior to the show that we could start announcing it.  I started to get tagged on IG and FB and quickly called my sister to tell her to keep my mom off the computer.  It didn't work…

GLAAD: What were you feeling when the "Same Love" performance was going on and Queen Latifah was officiating the ceremony?

QG: If I could allow the world to see what I saw through my eyes, they would understand the wellspring of love we were surrounded by and filled with in that moment.  The Staples Center is a gigantic arena and it was filled to the ceilings with people of all ages, races, and genders. The moment we began our wedding march down the aisles, the audience was taken by surprise, but the sheer joy of the moment brought them to their feet. To walk through a sea of people, simply beautiful people, celebrating love, you felt welcomed and embraced and celebrated. We were overwhelmed by the outpouring.